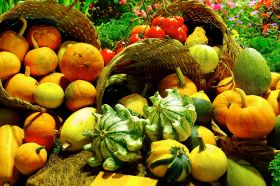 Sixteen per cent of British households are buying less fruit and vegetables, including almost 25 per cent of lower-income families.

That's according to a new study by market research firm Mintel featured in today's Daily Telegraph, which claims that just 24 per cent of the nation are now eating five portions of fruit and vegetables a day.

The research follows the poor harvest of 2012, which might account for some of the figures, with 38 per cent of adults admitting they "struggle" to eat their '5 A DAY', and just 40 per cent seeing fresh fruit as good value for money.

Mintel said shoppers wanted more information about the nutrititional benefits of eating fruit and vegetables, and warned the number of processed foods which count towards the 5 A DAY target, such as smoothies and soups, was confusing the public.

Its 'Fruit and Vegetables' report also showed that over-55s eat the highest proportion of fruit and vegetables, with 31 per cent eating five a day.

And 34 per cent said they would pay a full price for "ugly" or oddly-shaped fruit and vegetables if the quality, freshness and flavour was good enough.