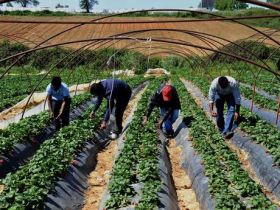 A man has been arrested after allegedly exploiting Slovakian workers to supply labour to the food industry in the Medway towns, Kent.

The 35 year old, from Gillingham, was arrested on suspicion of people trafficking and money laundering as part of a crackdown on illegal gang labour suppliers.

Officers carried out warrants in the early hours of last Thursday morning at addresses in Windsor Road and Richmond Road, Gillingham. The man is now being held in police custody.

The arrest follows an investigation supported by the Gangmasters Licensing Authority (GLA), the UK Human Trafficking Centre (UKHTC), Red Cross and the Department for Work and Pensions.

With the help of interpreters at least seven people were taken to a reception centre that had been set up to offer the victims support.

The investigation looked into allegations that workers were being forced to live in squalid conditions and threatened with violence if they did not comply with supervisors' instructions. The victims were working in a number of different industries including the food industry.

Detective sergeant Susan Marsden said extensive intelligence work and reports from the community suggest Slovakian migrants are being lured into the country with offers of work, accommodation and prosperity.

“The reality is they are being forced into living in squalid conditions and have their lives controlled by those that had promised so much and are now profiting from their labour,” she said.

She added: “Typically our victims are being asked to work two jobs, often up to 60 hours a week, and receiving a nominal wage of £10-£15 with the supervisors pocketing the rest of the money.”

GLA chief executive Paul Broadbent said: “Our investigation leads us to believe there were people in these addresses whose lives were controlled by others – being forced to work and receiving a fraction of the wages they actually earned.

“Sadly, we are uncovering more and more cases of this type across the UK. The GLA will continue to work to protect vulnerable people, prevent workers being exploited and tackle those who take advantage by operating outside the law.

“We will now seek to liaise with any workers involved to offer our support in finding them alternative accommodation and jobs, where they will receive every penny they are due.”

The GLA is a public body formed in 2005 in the wake of the Morecambe Bay cockle picking disaster when 23 Chinese workers drowned.

It said that if anyone suspects instances of forced labour they should contact the GLA’s free line on 0800 432 0804.