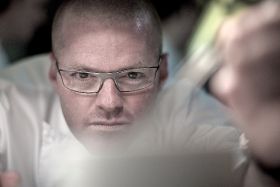 The UK boasts 12 restaurants in the Elite 100 Restaurants 2014, with eight of these based in London.

The Ledbury is ranked in ninth place, Dinner by Heston Blumenthal is in 23rd, Restaurant Gordon Ramsay comes in at 24, Alain Ducasse at The Dorchester is ranked 54th, Le Gavroche is 74th, Amaya is in 76th place, Nobu is at number 96, while Zuma just makes the cut as the world's 99th best restaurant.

Meanwhile, outside the capital, Heston Blumenthal’s The Fat Duck (3) in Berkshire makes it into the top five restaurants in the world, with Raymond Blanc’s Le Manoir in Oxfordshire (30) and Alain Roux’s The Waterside Inn (94) also putting in an appearance on the list.

The number one spot on the New York-based luxury lifestyle media group's annual countdown is claimed by Chicago’s Alinea, with Grant Achatz and his team coming out on top for a third consecutive year. The three-Michelin-starred destination offers an eighteen-course tasting menu.

On his double inclusion, Blumenthal - a recent FPJ cover star - said:  “Food critics are very important for the business and obviously to bring the general public in, but ultimately you're cooking for your customers, and you want to give them the best pleasure and experience. So to have this recognition, after we’ve been going for nearly 20 years, it’s fantastic.”

The Ledbury in Notting Hill also climbs this year, rising one place from number 10 to 9 in the annual guide.

Head chef Brett Graham, said: “We’ve got a great, enthusiastic young team here. We all work really hard together to do our best towards the guests’ experience and it’s really nice for the team to get an award like this and recognition of all their hard work. This is an important award and we’re very pleased we’re included in it.”

London and the UK’s restaurant ranking isn’t a surprise, according to renowned food critic Andy Hayler, a man who has eaten at every Michelin star restaurant in the world.

On London and the UK’s stellar performance in the Elite 100 Restaurants 2014, he said: “ I think this really reflects London’s status as an international dining destination. London’s got a terrific mix of nationalities in terms of its population and that’s reflected in the dining scene.

“At the high end you’ve clearly got some very good restaurants as well, so restaurants like The Ledbury. It’s particularly well thought of in London. It’s interesting to see the list including Le Gavroche, an old favorite of mine, which is much more classical in style, and I think it’s good to see that type of restaurant getting recognition,” he added.

This year’s Top Ten on the Elite Top 100 Restaurants: