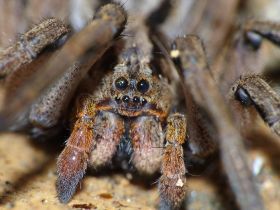 Shooing a daddy longlegs out of the house with a rolled-up magazine is a scary enough task for a lot of people.

So imagine the reaction of two shop owners in West Sussex when they discovered a tarantula in a case of bananas they had on sale.

The duo, who trade in the the Horsham/Crawley area, made the discovery on Thursday (31 July), and took the spider to their local vet.

The RSPCA was called and the 3in (8cm) arachnid has been given a new home at an East Sussex zoo.

The tarantula has been identified as a fully-grown Peruvian Green Velvet. Although they are venomous, the species is not considered particularly dangerous to humans.