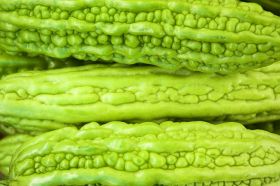 Vietnamese bitter melon exports to the EU have been temporarily suspended

Three shipments of Vietnamese basil and bitter melon to the European Union (EU) have been found to contain bacteria harmful to human health, since February 2014.

The European Commission Director General for Health and Consumers (DGSANCO) has warned Vietnamese exporters that if two more shipments of fresh produce are found to violate food safety regulations, all green produce shipments from Vietnam will be banned from entering the EU.

Under current regulations, DGSANCO has ruled that if five shipments of Vietnamese produce are found to breach food safety rules between February 2014 and February 2015, a ban on green produce exports will be implemented.

As a result of the warning, Vietnam’s Plant Protection Department has temporarily suspended new exports of basil, chili, bitter melon, celery and cilantro in order to prevent a blanket ban.

“All Vietnamese fruit and vegetable products will be blacklisted by DGSANCO if two more violations are detected,” Dang Van Hoang from the Plant Protection Department told Tuoi Tre News. Hoang said the ban would see Vietnam lose its market share to local competitors like Thailand, and that Vietnamese agencies were working to increase the number of food safety violations allowed before a ban is imposed.

“Only a few exporters are now hurting the whole export sector,” Hoang said.