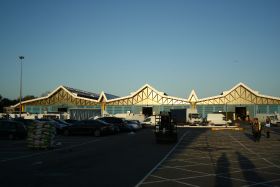 Nartek was based at New Spitalfields Market, London

Wholesalers and importers across the UK and the Netherlands are owed thousands of pounds after New Spitalfields Market-based firm Nartek went into liquidation, FPJ can reveal.

The total amount owed to creditors is over £2 million, with around 150 businesses left with unpaid invoices of up to £300,000 after the company folded last month.

Most of the creditors are based in the UK, with several from the Netherlands as well as Belgium, Jordan, France and Poland.

Official liquidation firm Panos Eliades Franklin & Co said the Turkish wholesaler went into liquidation on 6 February, and confirmed it is now in the process of retrieving money owed to the company, so that it can pay its debts.

Partner Panos Eliades, who has responsibility for the case, said the liquidation was a result of cashflow mismanagement, and said that the money owed to the company by a further 150 companies would be enough to cover debts to creditors, providing it can be retrieved.

He said one of the company’s directors invested £500,000 of his own money, which was also lost.

“Nartek owes £2.2m to around 150 creditors. It was a case of money was going out quicker than it was going in. If we regained all the money, everyone would be paid off, but this could take another six to nine months.

“The company should have concentrated more on collecting the money due to them. The reason I will need time is that some, not all, of the people that owe money operate from a stall and not from a shop, which makes it more difficult to sue if push comes to shove.”

One importer, who said he is not owed money, nevertheless described the news as a “major casualty” in the wholesale sector. “A lot of people are owed a lot of money. We haven’t had a major bankruptcy for a couple of years now,” he told FPJ.

A statement from Marni Fruit, published on FreshPlaza, read: "Deliveries are claimed weeks after delivery and credit notes are made. Despite many promises of payment, nothing has been received so far. Invoices are now 120 and 113 days old. Emails and phones are no longer being answered."

Nartek was not available for comment at the time of writing.