Argentina's quality seal for exported lemons has forecast a large crop this season, though damaging rains in key production areas have cut off some growers from their crops 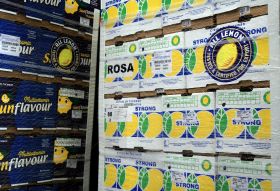 Heavy rains have destroyed bridges and blocked growers from accessing their farms, causing delays to the harvesting in Argentina’s peak lemon producing region.

The country’s quality seal for exported lemons, All Lemon, has said the damage and delays from the rains will increase production costs for a crop that is forecast to be larger than last season’s, with more damaging weather on the way.

“This season we shall have larger volumes of lemons compared to 2014, which is a positive step forwards as it puts us in a better position to meet demand for our product,” All Lemon president Romain Corneille said in a company statement. “With regards to the crop itself, the heavy rains that we have experiences blocked the entrances to some of our farms and destroyed bridges throughout the region, causing obstructions to many roads and routes, in addition to causing rivers to break their banks.”

Corneille added that managing the impact of damaging weather was part of All Lemon’s job, placing emphasis on the tight quality control on its lemon exports.

“Above all, out aim is to reassure the marketplace and the clients that we work with; to offer them the greatest of guarantees possible that they will receive only the best quality fruit that meets the standards that All Lemon stands for,” said All Lemon VP Carlos Parravicini.

The overall Argentine lemon crop is forecast to be 15-20 per cent lighter than what is considered normal production levels due to the ongoing effects of the 2013 freeze and 2013/14 drought .