Five-year project will create GM potato that will be resistant to late potato blight, potato cyst nematodes and bruising 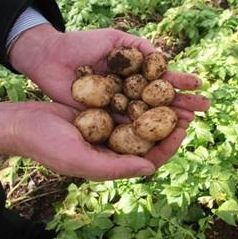 Potato producers lose money from common diseases such as blight

A project to develop a genetically-modified Maris Piper potato that will be resistant to two common diseases has won £841,000 in funding.

Known as the TSL Potato Partnership Project, the new GM potato will be resistant to late potato blight and potato cyst nematodes.

It will also contain lower levels of reducing sugars and asparagine, and it will be less prone to bruise damage, which will reduce food waste caused by discarding bruised tubers.

Field trials will take place over a five-year period in a confined area near Norwich, protected by a secure fence that has been used before for GM trials.

The project has won five years of funding through the Horticulture and Potato Initiative (HAPI), supported by the Biotechnology and Biological Sciences Research Council (BBSRC) and the Natural Environment Research Council (NERC).

A further ten per cent will be provided by two commercial partners – BioPotatoes UK and Simplot, based in the US.

If the project is successful, both companies will invest in taking the potato through the process of regulatory approval, and to market, in the US and Europe.

This project will cost approximately £900k over five years, and is expected to be available commercially in around eight to ten years time.

Following field trials, scientists will prepare a dossier for the independent regulatory authorities to show the new variety is productive, has the intended additional properties, and is safe for human consumption.  This process would begin at the earliest three years after the beginning of the project.

Project leader Professor Jonathan Jones said: “We’re still some years away from our final crop. It would need to go through all the necessary approval processes. If it passes those tests and if it is approved for planting, this potato could prevent many tonnes of pesticides and fungicides being sprayed on our land, increase yields and make a healthier crisp or chip.”

The TSL Potato Partnership Project estimates that potato blight costs UK potato farmers an average of £55 million per year in losses and costs of controls, and potato cyst nematodes cause up to £26 million a year in losses. Two out of five possible pesticides used to control them have already been withdrawn from use by the EU, the body said.