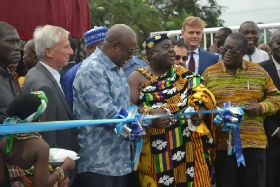 President Mahama, third from left (in blue), cutting the ribbon.

Blue Skies has opened a new factory in Ghana, with the West African nation's president himself on hand to open the venue.

The UK-headquartered firm's new factory, which will create jobs for 300 people, is aimed at helping Blue Skies to expand its juice business and launch new products in Ghana and around the world.

President John Dramani Mahama opened the new state-of-the-art facility earlier this month. It is located on the doorstep of the company’s two factories in Dobro, near to the town of Nsawam.

The new facility has been financed by Blue Skies with support from the Dutch Government’s PSI (Private Sector Investment) programme.

Blue Skies now directly provides work for 2,700 Ghanaians, affirming its status as one of the biggest employers in the private sector in Ghana.

The firm's founder and chairman, Anthony Pile, said: “With this new factory, we believe we are playing an important part in the bid to crush poverty and to lift this economy and prospects for this great country.

"We are supporting the important demographic objective of retaining people in the rural areas where there is more opportunity anyway to put this country where it needs to be – agriculturally and economically - out in front.”