Until this Thai-sourced product launched, shoppers could only buy mature brown coconuts in UK supermarket aisles 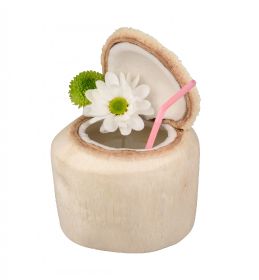 Asda has launched 'young coconuts' into stores nationwide, receiving backing from one of the stars of ITV's The Only Way Is Essex (TOWIE) in the process.

Until now, shoppers could only buy mature brown coconuts in UK supermarket aisles, but Asda’s younger model comes hot on the heels of the thirst for coconut water drinks.

Dubbed ‘nature’s Lucozade’ the young coconuts can reportedly help you rehydrate post-workout due to their isotopic properties: a property that TOWIE’s Ferne McCann took to Twitter to eulogise about to her 606,000 followers.

Unlike some pre-packaged coconut waters, Asda’s young coconuts have no added sugar, no additives, and no preservatives or artificial colours, sweeteners or other added nasties.

Supplied from growers in Thailand, the outer green flesh of the young coconut shell is shaved down for easy handling, and all shoppers have to do is chop off the top at home and stick in a straw.

Young coconuts differ from the more mature, brown and hairy coconuts we’re used to seeing on shelves as the insides are made of coconut water and a jelly-like flesh - the older they get, the darker the outer shell becomes and the inside of the coconut turns to hard white flesh with no water at all.

Charlie Mills, fresh produce manager at Asda, said: “As Brits become increasingly interested in natural, clean hydration with no added extras we felt we needed to go right to the source and give shoppers the purest from of coconut water we can.

"Bottled versions are great for people on the go, but if you’re after coconut water in its purest form then an Asda young coconut is the nuts.”