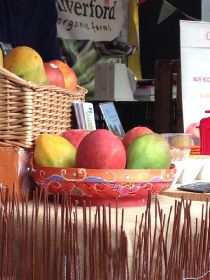 EcoPeace mangoes are now on sale in the UK

The company, established using an ethical socio-economic model, supplies into the UK from June until August, and had sold over 100 boxes to the UK by the start of July. On average the company produces between 15 and 20 tonnes of mangoes a year.

A 6kg box is currently retailing at £27, while mango jam or chutney is available for £4.50 per jar.

Grown on a farm in Pout, near Senegal’s capital of Dakar, EcoPeace mangoes include Kent, Smith and Baguinda varieties, which are certified organic according to GlobalGAP standards.

The company was founded in 2006 by Sheikh Aly N’Daw, head of NGO International Sufi School, and began with the acquisition of 10 hectares of land in the village of Bayouf Pout, Senegal.

Its employees are mainly local women and young people, who are developing the fruit and vegetable processing unit where beverages, cordials, pickles and jams are produced by hand. The company also produces a range of premium herbal teas, dietary supplements and syrups, made with traditional plants and fruits from Senegal.