Farming association says apple industry will produce 170,000 tonnes during this season with 80 per cent earmarked for export 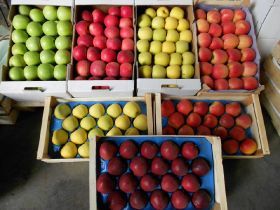 Macedonia exports 80 per cent of its apple crop

Macedonia said it is expecting the biggest apple crop in the country’s history with 170,000 tonnes forecasted for the 2015-2016 season.

Of the total amount, 140,000t is expected to come from the region of Prepsa, figures from the Federation of Farmers in the Republic of Macedonia (FFRM) said.

According to the FFRM, Russian retailers have just begun purchasing for this season at a price of around €0.20 per kilogram, depending on variety and quality.

Macedonia exports 80 per cent of its apple crop with the biggest export markets as Russia and the Middle East, as well as neighbouring countries.