Prices plummet due to cauliflower glut 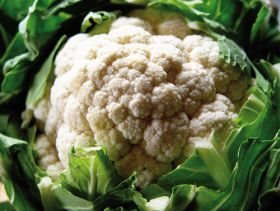 UK cauliflower crops are maturing ahead of schedule

Unseasonably warm temperatures has led to a “nightmare” glut of cauliflowers in the UK meaning prices have plummeted and crops are being left unharvested.

While most of the country had a cold snap over the weekend, key brassica growing region Cornwall is experiencing temperatures as high as 13 degrees, with the mercury remaining in double figures throughout the night.

Crops have matured earlier than expected meaning growers are now harvesting what was planned for January, while others are bypassing large percentages of their acreage.

Greville Richards, managing director of Southern England Farms, said the recent mild conditions are a “nightmare” and warned that the current glut will create a supply gap later on in the season.

“Cornwall is experiencing extremely mild conditions – we’ve had one night of frost but temperatures are due to rise again up to 12-13 degrees and we will see double digit figures in the evening from Tuesday,” he said. “There is no sign of any cold weather, which has had a major knock on effect on cauliflowers in Cornwall.

“We’re all at the same stage and there will be a massive hole at some point after mid January, if not before. It won’t be in 2015, but it will happen,” he said, adding that he does not foresee any issues with supply over the key Christmas trading period.

Richards said Spain is also packing ahead of schedule, while French auctions in Brittany are already packing “huge” volumes as a result of the surplus.

French trade is “quiet” with low demand and high volumes following the Paris terror attacks and mass killings, according to one Belgian vegetable salesman, which is compounding the oversupply in the market.

Sales manager at Belgian vegetable co-operative REO, Tom Premereur, said: “Warm temperatures in France have created higher than usual volumes. And after the attacks in Paris, commerce in France is very quiet. So low demand and high volumes.”

Commercial director at Lincolnshire brassica grower, Richard Mowbray, said the recent glut of cauliflower has meant more has gone for processing or freezing.

“There has been a glut on cauliflowers – the season was a couple of weeks later than planned until about a month ago. This is down to unseasonably warm weather during November when it was around 10 degrees warmer than average," he said.

"Crops caught up and have overtaken planning, which created an oversupply in the market. Crops were also coming in from Poland, Holland and Spain has just started. We expect it to calm down a week after next – at the moment we still have high volumes off the back of the glut.”

Mowbray said the glut hasn’t had a “massive effect on price”, although it has affected wholesale prices, while Richards said retailers have honoured fixed price contracts.