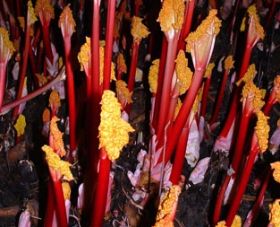 Yorkshire Forced Rhubarb is in short supply while the asparagus season is around two months ahead of schedule due to recent unseasonably warm temperatures.

Small volumes of British-grown asparagus appeared on wholesale markets last week, although picking has now stopped due to cold temperatures.

Full volumes of Yorkshire rhubarb, which relies on cold temperatures to force its early growth, will not hit the market until the second week of February, although small volumes are starting to appear with wholesalers now. Most retail volumes are still Dutch.

Grower and rhubarb pioneer Janet Oldroyd Hulme said so far this season has been a “disaster”, and the industry is now trying “desperately to catch up”. “The cold has been so long in coming, we’re only just getting decent amounts. Supplies are very short at the moment. There won’t be much availability during January, but we’re hoping to be back to normal by the second week of February," she said.

Oldroyd Hulme said prices are quite high at the moment due to the shortage, although the quality and colour is “lovely”.

Elsewhere, the British asparagus season is running around two months ahead of schedule, according to one leading grower. Henry Chinn, of Cobrey Farms, said early volumes have been harvested and delivered to wholesale, but due to a recent frost picking has now stopped.

“The forecast is not looking warm, but my thinking is we were bound to get some cold weather. We are potentially still on for an early season.

“We would normally expect big volumes from the tunnel crop by Valentine’s Day, with the main volume coming through by the end of March. We are hoping for another pick this week but it is weather dependent.”

Chinn said temperatures in December were around eight degrees higher than average, leading to the early season. “We’re always trying to be early, but our retail customers need big volumes," he said.