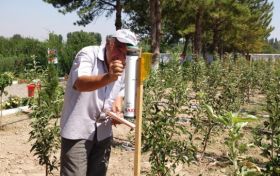 Licensed fresh produce traders in Uzbekistan could once again begin to export fruit and vegetables by road from 1 July, according to media reports.

Last September the government banned trucks taking produce out of the country to prevent Uzbek produce being re-exported by companies in Kazakhstan to lucrative markets like Russia.

But the Uzbek government reportedly decided last week to lift the ban from 1 July in a bid to boost farmer revenue and make producers less reliant on cotton-growing, eurasianet said.

The bulk of agricultural exports have tended to go to neighbouring Kazakhstan since rail and air transportation are not economically viable to most medium-sized businesses and farmers dealing in small quantities.

President Islam Karimov said the goal is to reduce annual cotton production to 3m tonnes by 2020 as the cultivation of fruit and vegetables is gradually increased.

Authorities estimate the downsizing of the cotton industry will free up more than 1.7m2 of irrigated land. And some international experts believe Uzbekistan has the potential to raise the value of its annual agricultural exports to US$7bn, the report said.