'Hundreds' of spiders crawl out of man's Tesco bananas 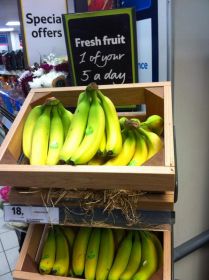 A man has said he’s been put off bananas for life after "hundreds of spiders" allegedly crawled out of a pack he purchased at a Tesco store.

Declan King, 22, had already eaten two bananas from the pack, and claims he only discovered the spiders after peeling the third banana.

He then put the bunch inside a plastic box, in which he says the spiders started building a web.

King took the allegedly infested pack, which originated in Cameroon, back to Tesco’s Farnworth store in Greater Manchester, where he claims staff offered him a £1 refund, wrapped them in carrier bags to be sent to Tesco’s head office for testing.

Tesco has said that King will get the results of the tests within 14 days.

He told Metro: "I buy them every day, and I usually give them to Bailey, my baby boy, so he could have eaten them. I’m put off bananas now.

"They weren’t bothered, they didn’t even check any of the other packs of bananas for other spiders."

A Tesco spokesperson said: "We sell millions of bananas every week and our growers work hard to clean and inspect all the fruit carefully."

The spokesperson added that no further complaints have been made about the batch, the shelves of that particular store have been checked, and there was no evidence of any other bananas being affected.