Slovakian nationals each get six years in prison for crimes, following cross-authority investigation which began in 2012 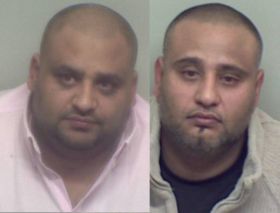 Two Slovakian brothers who exploited fellow Slovak nationals living in the Medway towns and working in the fresh produce industry have been sentenced to six years each in prison.

Marian Dzuga, 38, of Windsor Road, Gillingham, and Jozef Dzuga, 37, of Salisbury Road, Chatham, were both found guilty of trafficking within the UK with intent to exploit following a month-long trial at Maidstone Crown Court.

An investigation began after one of the victims went into a police station in September 2012 to report he was the victim of human trafficking and labour exploitation.

Officers from the Kent and Essex Serious Crime Directorate began an investigation where the victim revealed he had been homeless in Slovakia in 2005 when the brothers approached him and persuaded him to move to the UK on the promise there would be accommodation and work waiting for him.

In reality, the brothers took control of his bank account and although he was living at an address in Chatham, he was made to work all over the country.

Supported by the Gangmasters Licensing Authority (GLA), the UK Human Trafficking Centre (UKHTC), HMRC, Red Cross and the Department for Work and Pensions, warrants were carried out in November 2013 at the brothers’ home addresses in Chatham where a number of victims were found to be forced to live in squalid conditions and threatened with violence if they did not comply with their supervisor’s instructions. The victims were working in a number of different industries, as well as fresh produce.

All the victims, four of whom gave evidence during the trial revealed they had been brought into the country on the promise of work and accommodation.

The brothers bought their coach tickets and helped them into the country, they were helped to set up bank accounts but all their documents were taken away which police later found in the addresses. The brothers would keep the majority of their wages to fund their gambling habits.

Investigating officer Detective Constable Phil Kershaw said: “This was a particularly difficult case involving vulnerable victims who required continuous support. Their desire for a better life was exploited by the Dzugas for financial gain and I applaud their courage in coming forward and for giving evidence against these men. The Dzugas were not running a legitimate job finding business.

“They were not helping out their fellow country folk. This was a well organised enterprise to traffic people into the UK, within the UK and then, when they were where the Dzugas needed them to be, to force them to work. They paid them a pittance, deprived them of any control over their affairs, including their identity documents. We are committed to protecting all communities in Kent by pursuing criminals who seek to cause harm by exploiting vulnerable people.”

Detective Chief Inspector Morgan Cronin said: “This is an excellent example of how the expertise within our serious economic crime unit can be used to tackle those who cause serious harm in society, and exploit vulnerable people. We have also secured a 10-year slavery and trafficking prevention order to ensure that these men have restrictions placed on them when they are released.”