Fruit and veg goes to Hollywood 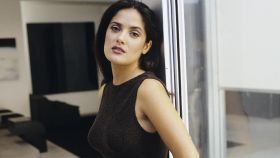 Actress Salma Hayek was spotted posing with fresh produce at the premier of her new animated film Sausage Party.

Hayek, who voices Teresa Taco in the film, gave the red carpet a fruit and veg twist at the Los Angeles event, holding up watermelons and lettuces, and lying on a row of produce pallets. Life-size characters of the animated stars were also in attendance.

The move is pitched as a “cartoon celebration of food”, written and directed by actor Seth Rogan, who also stars in the film alongside Hayek, Paul Rudd, Michael Cera, Danny McBride and Nick Kroll.

Although the film is animated, the R-rated comedy faced some cuts from the MPAA, Mail Online reported. Rogen told The Los Angeles Times: “I'm honestly shocked by what we got away with...because it's food.”