Berry Gardens MD and co-driver have raised over £4,000 by driving 2,000 miles around Britain in a charity classic car race 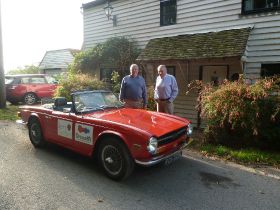 Berry Gardens managing director Nicholas Marston has raised over £4,000 for Guide Dogs for the Blind after participating once again in an iconic classic car race around Britain.

Marston completed the Round Britain Reliability Run, which involves driving 2,000 miles around Britain in 48 hours, in his cherished 1973 Triumph TR6. He was joined on the drive by Dave McGregor, and together the team raised over £4,250.

The Round Britain Reliability Run began in 1966, and sees motorists drive to pre-arranged control stops with no overnight stays. For 2016 the event supported Guide Dogs for the Blind and hoped to raise over £50,000.