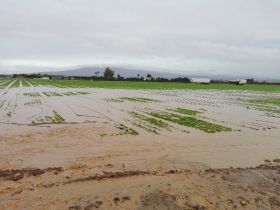 A flooded endive field in Almeria

Wholesalers and importers are struggling this week with a triple whammy of severe supply issues after floods in Spain and freezing temperatures in Italy and France crippled major European producer regions.

Yields on some crops in Spain have dropped to around 30 per cent of their usual level due to torrential rain and some of the worse flooding seen by the Murcia region in years. There are further shortages expected throughout the Spanish season as planting was halted due to waterlogged fields and flooded roads blocking access.

“There will be challenges on supply throughout January and the rest of the season,” said G’s marketing director Anthony Gardiner. “It has affected most products, including salad, brassicas, citrus and protected crops.”

Total Produce said wholehead salad and baby leaf are among the worst hit, with around two thirds of the current crop destroyed by floods, and has recommended that its customers consider other products.

Eddie Bowers, of Bradford importer Burbank Produce, said around half of his grower’s endive supply from Almeria has been lost. Spanish supply could be affected until as late as March or April, Bowers said, adding: “I’ve never seen anything like it, it's shocking. Supply is very limited and prices are through the roof.

"I don't think we will see it improving any time soon, and there isn't anywhere else to source from on many products. Endives have been really badly affected further south in Almeria. The grower said she's lost around one million heads," he said, adding that he is now sourcing from southern France for endive.

Burbank Produce customers have been told orders are limited, added Bowers, who said managing expectations and not making promises on supply will be key. "Water doesn't disappear overnight, some younger crops will be completely gone," he said.

The impact of cold temperatures is just starting to impact on French supply, Bowers added, with salad prices rising over the past two to three days.

In Italy, snow and ice are threatening key winter supply of salads and citrus, as well as later supply of grapes. Thomas Drahorad, of Italian firm NCX Drahorad, warned FPJ recently that "there will be a lack of volumes and quality, and prices will rise."

Bowers said cauliflowers from Brittany have been shipped to Italy to replace produce there which has frozen, while in Germany production has been hit by temperatures of up to -12 degrees.