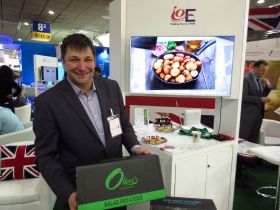 Cambridgeshire potato grower Isle of Ely Produce has launched a new brand aimed at foodservice and catering suppliers to mark its entrance into the pre pack market.

The firm, which exhibited at Fruit Logistica for the first time last week, is primarily known as a supplier to the chipping market and for its close ties with the fish and chip sector.

“This is a way for us to grow the business,” said Boutwood. “The Oliver’s brand will include salad and baking potatoes, aimed at chefs, caterers and foodservice suppliers.

“We want to get potatoes back on the plate again. The most important thing is for chefs to understand the difference between varieties. If you choose the wrong potato this might result in a consumer choosing a different carbohydrate next time, such as rice or pasta.”

Boutwood said the company has successfully helped educate its primary customers in the fish and chip sector, in things like portion control and healthy eating, and hopes to replicate this by offering recipe and nutrition information for foodservice suppliers via the Oliver’s website.

The new brand is primarily targeted at catering and foodservice, as well as schools, but there are also plans to target exports. It is not designed for the retail market, Boutwood said, adding that the company prefers to focus on more niche markes.

“We’ve had lots of interest from Nordic countries and mainland Europe, as well as the Far East,” he said, adding that the business will be able to use its established trade links with Dubai, Singapore, and Ireland.