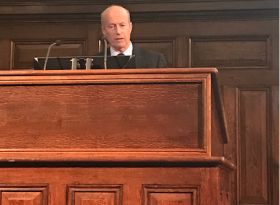 Shropshire, who was addressing a Worshipful Company of Fruiterers conference in London, said the cost of the National Living Wage (NLW), combined with the lack of available labour, was a much bigger concern to his business than Brexit.

Spelling out the economic contribution made by G’s 2,500 seasonal staff, Shropshire said they paid a combined £4.6 million in tax in 2016, as well as spending some £10m in the local area.

Pouring cold water on suggestions that migrant workers were a drain on the nation’s resources, he pointed out that only eight of those staff claimed family tax credits last year, and none collected working tax credits. Among the 2,500 staff there were only 374 visits to A&E, with just one overnight stay – for an appendix operation. Extrapolating the figures across the industry, Shropshire estimated that seasonal workers contributed over £100m to the UK taxman.

However, he said the first option was a non-starter as there’s only 250 unemployed people in Ely, and while innovation is ongoing, robots are not the immediate answer. G’s is already packing, flow-wrapping and printing in the field, but harvesting many crops by machine is still some way off.

Shropshire conceded the industry needs to make itself more attractive to workers by improving accommodation standards, and also said the wasteful practice of ‘overgrowing’ by 30 per cent to ensure customers are never let down may have to change to better match production with demand.

He also raised the possibility of moving production of certain crops overseas, citing the example of spring onions, a crop in which 65 per cent of the production cost is labour. “There are a vast number of people desperate for work in Senegal,” he said. “We have run a project to grow spring onions through the winter. We could move production to Senegal [if that’s what the government wants].”

Similarly in Poland, a scheme allows the company to meet its labour needs with Ukrainian students, making production in that country more attractive to growers.

Shropshire was also asked for his views on the low prices of iceberg lettuce during the January shortages, where supermarkets were slow to put up prices. “It’s a really big problem,” he said. “We have an artificial market that we don’t see in the EU. In Europe the price went to €2 pretty quickly. By the time it rose here supply was back. The artificial market does cause a huge distraction, and the UK is the only market that operates like that.”

Growers have become more efficient at dealing with extreme events such as the winter weather, Shropshire added, causing a degree of complacency in both the supply chain and among retailers that there will not be shortages.