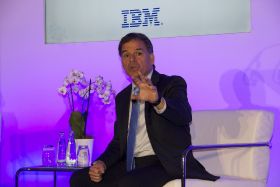 Frank Yiannas at the CGF Global Summit in Berlin

Fresh produce companies must collaborate to bring complete transparency to the supply chain by introducing a universal blockchain system, US retailer Walmart has urged.

“Food safety is a shared responsibility and we win or lose together,” the supermarket’s vice president for food safety, Frank Yiannas, told delegates at the Consumer Goods Forum Global Summit in Berlin.

“We want to collaborate on this,” he added. “It’s a non-competitive issue.”

Since October 2016 Walmart has been trialling a blockchain system designed by software provider IBM, with the aim of testing the benefits it can bring to the fresh produce sector.

In his presentation in Berlin, Yiannas said a digitised system to track products from farm to fork was needed to help prevent food-borne illnesses and deter unscrupulous actions from suppliers.

Despite these benefits, the food safety director stressed that for a blockchain system to be fully effective it must used as widely as possible; be based on a common set of standards; be interoperable with other tracking systems; and be cheap and easy to use.

When asked about the cost of introducing the system in mangoes – one of the supply chains piloted by Walmart – Yiannas, said he was “convinced” there was a return on investment.

“We are 100 per cent convinced that blockchain doesn’t add cost to the food system, it takes cost out of it,” he said. “In the US alone food-borne disease costs the industry tens of billions of dollars in lost productivity, medical bills, lawsuits, facilities being closed.”

Indeed, one of the main advantages of blockchain is the ability it gives companies to react quickly to food safety scares. Under its old system Walmart discovered that it took six days and 18 hours to trace a package of mangoes all the way back to the farm, whereas with the IBM blockchain software this was possible in just 2.2 seconds.

Blockchain, which was conceptualised by the anonymous inventor of bitcoin Satoshi Nakamoto in 2008, is built on ‘distributed ledger’ technology, which shares transaction data between the different players in a supply chain. Transactions are recorded on the ledger, and these transactions cannot be removed or changed, building trust into the system.

From a single receipt, companies can obtain information on the supplier, details on how and where produce was grown and who inspected it.