Vitamin A bananas hold the key in Africa 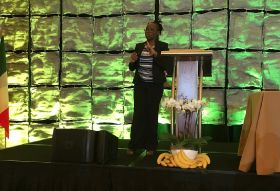 Dr Beatrice Ekesa-Onyango, a scientist at Bioversity International, told this week’s International Banana Congress in Miami that new studies revealed bananas to be a rich source of vitamin A, meaning the fruit could prove to be a valuable alternative to supplements among people suffering with compromised immune systems.

Outlining the results of work in east Africa, Onyango said children and women of child bearing age were particularly at risk of blindness and even death as a result of vitamin A deficiency, and called for a food-based approach to tackling the problem, with bananas at the forefront.

Bioversity International has been running a project to identify varieties high in vitamin A, with 15 varieties from locations as diverse as the Philippines, Papua New Guinea and Hawaii having been selected for further trial. Varieties with a particularly high vitamin A content include To’o, Apantu, Bira and Lahi. “Just one finger from one of these varieties can provide a high percentage of the vitamin A requirements of a healthy child,” she pointed out.

Crucially, the selected varieties also scored well for flavour in consumer tests, and Bioversity International has already prepared training manuals for how to use them in food production, as well as developing recipes with usage suggestions. In east Africa, bananas are ubiquitous in a wide range of meals and foodstuffs, with the average person consuming 250-400kg of the fruit every year, or between three and 11 bananas a day.

The project is initially targeting Uganda, but the findings are expected to be applied elsewhere in east Africa and even further afield. “In the next five years, it is hoped there will be more than five million farmers from Africa growing, consuming and marketing several vitamin A-rich bananas, with related improvements to the nutrition, health and livelihoods,” she said, adding that in the coming decade more than 10 million people will have access to nutritious and diverse products derived from vitamin A-rich banana varieties.