Food writers, wholesalers, chefs and friends have paid tribute to Charlie Hicks as a legend among his peers and the glue holding a community together 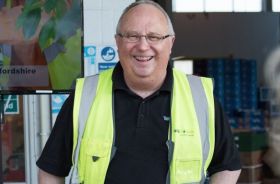 Recalling how he began in Covent Garden market as a young buyer in 1986, Wallace said he and Hicks became friends, before working together at wholesaler George Allen where they launched the popular and pioneering market reports. Speaking about co-hosting Veg Talk with Hicks, he said: "If it wasn’t for Charlie Hicks I would never have got that gig on Radio 4, and if I hadn’t done Veg Talk, I wouldn’t have had a television career. I didn’t have the talent to be on radio at that time – Charlie carried me.

"You won’t get another character like Charlie Hicks. There are some people that are simply unique and he was one of them. To have such knowledge and a passion for it – he understood the growing of fruit and veg, the harvesting, the shipping, the distribution and also the cooking and eating of them. The man was an encylopaedia of fruit and veg, and incredibly funny and good company."

Food writer for the Telegraph, Xanthe Clay, said: “Charlie was the link between field and fork. Everyone knew Charlie, and his contacts list was a Who’s Who of farming, food, and drink.  He was as at home cracking a joke on a field of asparagus in Herefordshire as in a three Michelin star kitchen. Charlie provided  our community’s glue: without him we will have to work hard to stick together.

Hicks also appeared at a number of FPJ publisher Fruitnet Media International's events, most recently at Fruitnet World of Fresh Ideas in Berlin last year. FPJ editor Michael Barker said: "Charlie was a great friend and supporter of FPJ, and always lit up the room when he spoke at our events. His warm character, magnetic personality and unmatched knowledge of fruit and veg will be deeply missed by all who knew him."