The war on waste

The UK still only rescues less than ten per cent of its edible surpluses, but the fight against food waste has gathered real momentum in the past few years 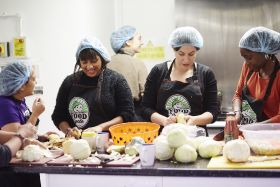 The facts around food waste are staggering: roughly a third of the food produced in the world is either lost or thrown away, according to the UN’s Food and Agriculture Organisation, while waste reduction charity Wrap estimates that the UK alone generates around 10 million tonnes of food waste a year, 60 per cent of which could have been avoided. This food has a value of over £17 billion, contributing 20m t of greenhouse gas emissions – a huge and underreported consequence of food waste.

This is by no means a new problem, and given the nature of supermarket supply, food surpluses will never be eradicated entirely. What can be done is to redistribute as much of the excess as possible to those who need it most.

Since the recession that began in 2008, food poverty in the UK has reached crisis levels, with eight million people in Britain living in food poverty, according to the UN. The majority of these people are not homeless but ‘working poor’, and this crisis seems to have finally spurred food producers and retailers into action. The past few years have seen a proliferation of new or rejuvenated initiatives in food supply, retail and distribution to tackle the problem.

By far the biggest food waste charity in Britain – and arguably the one of greatest relevance to the fresh produce industry – is FareShare, whose vans and distribution centres allow surplus food to reach 1,300 towns and cities across the UK. Its work focuses mainly on redistributing food from producers and packers – where the vast majority of waste originates.

In the last two years, FareShare has seen rapid growth in the volume of food it redistributes and the number of companies it works with. The organisation was set up over 20 years ago as the food collection arm of homeless charity Crisis, before splitting off and becoming an independent charity in 2004.

“If you were to plot our progress on a graph,” says chief executive Lindsay Boswell, “you’d see a flat line for quite a long time, and then it would slowly begin to steepen before increasing dramatically in the last couple of years.”

When Boswell started in the job seven years ago, he says there was a real lack of awareness – both that vast quantities of food were being wasted and that so many people were struggling to feed themselves. “I remember having big arguments with people who just didn’t accept that there were people going hungry in the UK,” he says.

Now the charity operates at considerable scale, rescuing over 13,500t of food in 2017 alone. Over the course of the year it provided enough food for 28.6m meals and supported around 7,000 charities and community groups. This only scratches the surface of the problem, however, with FareShare still only redistributing five per cent of all the surplus food that’s in date and fit for human consumption in the UK.

FareShare’s vision is for the UK to catch up with France, which currently redistributes ten times more than Britain – around 100,000t. Boswell insists his grand vision is more than achievable, but first, redistribution needs to be made more appealing for food businesses, he thinks.

“The switch that needs to be flicked is for it to become cost-neutral for any food business to give their surplus food to charity as opposed to any other form of disposal,” Boswell says. And FareShare is calling on the government to put their money where the nation’s mouth is and invest £15m a year to tackle the problem.

This money would allow producers to keep surpluses fit for consumption and transport them to the charities that need them – without having to absorb the costs themselves. This would allow for the redistribution of food worth £150m to £250m, according to Boswell, letting frontline charities spend their money elsewhere.

As things stand, it is often more appealing for fruit and vegetable producers to send surpluses for anaerobic digestion than it is to keep them for human consumption, Boswell explains. “What the government’s done – and they’ve been right to do it – is set up the UK as one of the premier anaerobic digestion economies in the world,” he says. “Being able to turn food into energy is pure alchemy, it’s fantastic. But in order to keep AD plants operating at maximum capacity, they need raw material, and we’re seeing good quality produce going into AD while there are people going hungry.”

Despite the tabloid attention on supermarket waste, it is surpluses in the supply chain that are the main problem – and opportunity – for organisations like FareShare. Retail waste only accounts for two per cent of the total, says Boswell. And although FareShare has developed wide-reaching supply arrangements with all of the UK’s major supermarkets, it has partly used these retailers as a gateway to access producers and suppliers further down the chain.

While FareShare handles the majority of food being redistributed in the UK – and it is the only large-scale charity collecting food direct from the packhouse – it is by no means the only organisation tackling the problem. One operation dealing with the so-called ‘last mile’ of food rescue is London-based distributor City Harvest. Set up four years ago, it collects food from supermarkets, wholesalers and a range of smaller retailers, taking it direct to organisations such as homeless shelters, women’s refuges and after-school programmes.

“City Harvest can collect food which expires that evening and get it to a charity that will cook it the same day,” says the charity’s chief executive Laura Winningham. “In theory, a local charity could call up their local supermarket and form an arrangement for food collection, but a lot of them don’t have transport, staffing, or operate at the right time of day to go and get the food,” she says. “Logistically, this last-mile redistribution is very complicated.”

Winningham echoes other food waste charities when she stresses the importance of developing personal relationships with in-store ‘advocates’. She counts Morrisons, Tesco, Sainsbury’s, Waitrose, M&S and Aldi among her suppliers, and has also developed a close link with New Covent Garden Market through the head of its tenants’ association, Gary Marshall. In each case, she says it is crucial to know a person within the business that is pushing for food to be redistributed rather than sent to landfill. “It always comes down to individuals,” she says. “No matter how many targets you put in place, sometimes, if people just don’t understand, they still throw food away.”

Mary McGrath of Food Cycle agrees, saying she’s found it a “little frustrating” that everyone thinks a food app will solve this problem. Her charity uses the Food Cloud app to collect food from Tesco and the Neighbourly app to collect from Waitrose and M&S, making it important for volunteers to understand the technologies, but she insists that the strength of any relationship with a retailer rests on the personalities.

Unlike some of the other charities in the sector, Food Cycle’s focus stretches beyond acting as a go-between for food businesses and frontline charities. As well as collecting the food, its volunteers cook it and share it with the guests at community kitchens across the country. “We’re very much about building communities and fighting loneliness using surplus food,” says McGrath.

But regardless of the approach of each organisation, there seems to be a universal positivity about the progress in tackling food waste. Food Cycle has welcomed the same number of volunteers in the last six months as it did in the 12 months previous; City Harvest redistributed 52t of food waste in December alone; and FareShare just launched its 21st regional centre in East Anglia as it expands its network of suppliers, charities and community groups.

The paradox is that the organisations tackling ‘food waste’ would cease to exist if there wasn’t any – they wouldn’t be able to help feed those in need if there wasn’t free food to give away.

But Boswell is clear that the day that production and imports match consumption in the UK would be “an amazing” one – particularly for the environment. Clearly that is never going to happen, however, and meanwhile, it’s essential there are charities out there to squeeze as much social good out of surplus food as possible.