The day bananas made their British debut

Rebecca Earle, professor of history at the University of Warwick, marks the 385th anniversary of the day bananas were first shown to Londoners by charting the fruit's fascinating story 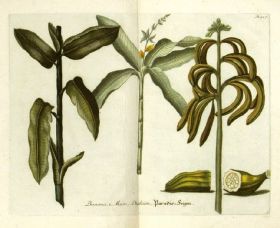 When Carmen Miranda sashayed her way into the hearts of Britain’s war-weary population in films such as The Gang’s All Here and That Night in Rio, her combination of tame eroticism and tropical fruit proved irresistible. Imagine having so much fruit you could wear it as a hat. To audiences suffering the strictures of rationing, Miranda’s tropical headgear shouted exoticism and abundance – with a touch of phallic sensuality thrown in.

In 1940s and 1950s Britain, bananas represented luxury, sunshine and sexiness. But entranced cinema-goers might have been surprised to learn that the bananas in Miranda’s tutti-frutti hat were in all probability descended from a strain developed in a hothouse at a stately home in Derbyshire, in England’s picturesque – but decidedly non-tropical – Midlands.

England got its first glimpse of the banana when herbalist, botanist and merchant Thomas Johnson displayed a bunch in his shop in Holborn, in the City of London, on 10 April 1633. He included a woodcut you see at the top of this article in his “very much enlarged” edition of John Gerard’s popular botanical encyclopedia, The herball or generall historie of plantes.

Johnson’s single stem of bananas came from the recently colonised island of Bermuda. We don’t know what variety it was – but these days the chances are that any banana you will find in a British supermarket will be descended from the Cavendish banana. This strain was developed in the 19th century by the head gardener at Chatsworth House, John Paxton. His invention is called the Cavendish, rather than the Paxton, after the family name of the owners of the Chatsworth estate, the Duke and Duchess of Devonshire.

Paxton spent several years developing his banana. In 1835 his plant finally bore fruit, which won him a prize from the Royal Horticultural Society.

The Cavendish slowly gained popularity as a cultigen, but its current dominance is the result of a calamity. The genetic uniformity of commercial banana plantations is a hostage to ill fortune. During the 1950s a virulent fungal pathogen wiped out the previously ubiquitous Gros Michel variety. The Cavendish stepped into the space left by the attack of Panama disease. There is no reason to assume the fate suffered by the Gros Michel will not befall the Cavendish. What then will adorn our bowls of cereal and add volume to our smoothies?

Taste of the tropics

Europeans have long associated bananas with the exotic pleasures of distant, island paradises. When the exhausted Ilarione da Bergamo arrived in the Caribbean in 1761 after a long sea voyage, the sight of the local fruit convinced the Italian friar that the travails of his protracted journey had been worthwhile. “Thus I began enjoying the delights of America,” he noted in his diary. Travellers marvelled at the exuberance of new-world nature, which – unlike her more parsimonious European sister – offered ripe, sweet fruit all year round.

The opportunity to gorge on sugary fruits became part of the European image of the tropics. The historian David Arnold pointed out that, in English: “One of the earliest and most enduring uses of the adjective ‘tropical’ was to describe fruit.”

And of course these juicy, succulent treasures quickly became associated, not only with the tropics, but also with the sexual allure travellers projected onto women in the torrid zone. Women and tropical fruits merged into one delightful commodity in the overheated imagination of the US journalist, Carleton Beals, as he travelled through Costa Rica in the 1930s. “And the women,” he wrote breathlessly in Banana Gold, “their firm ample flesh seems ready to burst through the satin skin—like ripe fruit!”. Carmen Miranda’s provocative wink and her banana hat played masterfully on this centuries-old association.

Bananas originated in south-east Asia and were brought to the New World by European settlers – who, by the 19th century, were growing them on vast plantations in the Caribbean. Labour conditions on banana plantations were often atrocious. When underpaid workers at a plantation on Colombia’s Caribbean coast struck for better working conditions in 1928, they were gunned down by Colombian troops probably called in at the behest of the United Fruit Company.

The novelist Gabriel García Márquez immortalised this tragedy in a memorable scene in his One Hundred Years of Solitude. “Look at the mess we’ve got ourselves into,” one of his characters remarks, “just because we invited a gringo to eat some bananas”.

Far worse messes were to occur in Guatemala in 1954, when the United Fruit Company cooperated closely with the Guatemalan military and the US State Department to overthrow the democratically-elected government of Jacobo Arbenz, who had made the mistake of nationalising some of the unused lands owned by the fruit company. The coup ushered in decades of military rule, during which the government, locked in a struggle with the guerrilla movement that inevitably arose in response, engaged in what many scholars have described as genocide against the Maya population.

Today, bananas are so commonplace that they scarcely conjure up the delight they once inspired in the travel-fatigued Ilarione da Bergamo and weary postwar cinema goers. Since 10 April 2018 marked the 385th anniversary of the day in 1633 when bananas were displayed for the first time to Londoners, it’s worth pondering the complex history behind the everyday banana.