M&S, Waitrose and soon Sainsbury’s the first to stock the vegetable as indoor season starts three weeks ahead of schedule 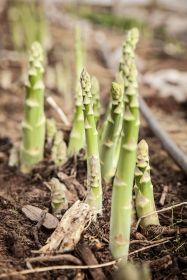 The first British asparagus of the season is starting to arrive at UK retailers, with Marks and Spencer and Waitrose both now stocking the seasonal favourite.

Marks & Spencer was the first to welcome in the UK season, with sales beginning last week, nearly three weeks before the traditional start of the season.

Sainsbury’s is set to stock small volumes from this weekend.

The asparagus currently available has been grown either in polytunnels or under glass, while the outdoor crop is likely to be delayed by two weeks as a result of the low temperatures caused by the ‘beast from the east’, The Guardian reported.

Last year British asparagus went on sale even earlier, at the end of March, with a warm spring also causing a glut of cauliflower.

With temperatures expected to improve, growers such as Wealmoor are expecting strong volumes by mid-May, according to The Guardian.