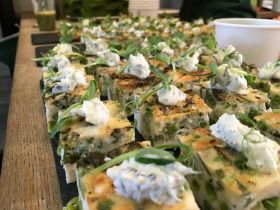 Britain’s first pea-based cafe opened for one day in London boasting an array of pea dishes cooked up by award-winning chef Rachel Green.

Serving up a variety of plates including pea frittatas, pea hummous and pea ice cream, the The Pea Place aimed show off the versatility of the little green veg to generations young and old during Great British Pea Week.

Green cooked up a fully vegan and vegetarian menu using packs of frozen peas, with visitors given free samples throughout the day.

Green, who grew up on a pea farm, said: “I think peas have played a huge part in the veg industry and it has long been a staple but people need to perceive them not just as a side dish but as a true ingredient in its own right.

“What I’m trying to demonstrate is that peas can be used as a main ingredient and they are also very good with other ingredients.

“It couldn’t be a better time to do this with the health trend happening, so the food industry needs to step up to the plate and not just serve them as a dried up side dish but use them as a main ingredient.”

Peas have enjoyed a recent rise in popularity, with volumes up 3.4 per cent in 2017 acording to Kantar Worldpanel figures. Hoping to harvest this growth, a collective of pea farmers and the British Growers Association run the Yes Peas initiative to inspire a more creative relationship with peas.

Growers Stephen Francis of Fen Peas, and Russell Corfield, of Aylsham Growers, attended the café with footage on the big screen of their harvest, using £500,000 machinery that picks thousands of peas per hour.

Franci said groups like Yes Peas can also help teach shoppers about the nutritional benefits of frozen peas. “The UK is the largest pea producer in northern Europe and we’re 97 per cent self sufficient with peas.

“They got a bad rap 13 to 14 years ago when it was reported that people were not eating them in restaurants but we’re here to show people what can be done with peas.

“Only 61 per cent of British households have peas in their freezer so that’s another 39 per cent we can get to. We have got to keep inspiring people, showing them the significant health benefits of peas, and show how frozen peas capture the nutrients as they come straight off the field.”