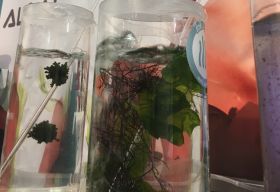 Portuguese seaweed farmers Alga plus is upping their production in anticipation of a rapid rise in fresh seaweed sales.

The company, formed by marine biologists in 2012, grow seven varieties of seaweed, producing 40 tonnes a year from containers, which is sold fresh or used as an ingredient in food manufacturing.

Helena Abreu, co-founder, said they aim to boost their production to 350 tonnes, from 14 hectares with fresh seaweed sales a core part of the company's strategy.

“The idea was to grow seaweed as a food ingredient and as a food product, especially with the trend for vegetarianism, healthy eating and sustainable food production. Seaweed was being produced in Europe but by wild harvest which is not very sustainable or harvested in enough quantities.

“We focus on growing native biomass. In terms of food manufacture it's growing and as a fresh product we sell to companies who use it fresh, in salads, with rice, or tapas. Customers can buy it in a pot, rinse off the salt and it’s ready to eat.”

Abreu says seaweed packs in big health benefits, being high in fibre and low in calories, as well as core minerals such as iodine, calcium, iron and selenium.

She says that popularity among shoppers is growing, especially in France, Holland and Spain, with supermarkets showing more interest. “It’s coming up very quickly, in Portugal we have big retailers involved.”