A Taste for Organics

With demand steady but flat, organic carrot growers have decided to take a new approach in search of renewed growth in the category. Fred Searle visits the UK's dominant grower to hear why flavour is king 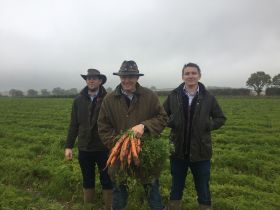 Perceptions of organic vegetable production are changing. Small ramshackle farms tended to by crusty hippies may still be some people’s idea of what it looks like, but this couldn’t be further from the reality at RB Organic’s farm on the Houghton estate in north Norfolk.

Spanning 3,000 acres, it is only one of six sites managed by the supplier, which produces 85 per cent of the organic carrots on British supermarket shelves. Carrots are harvested at the dizzying speed of 40 tonnes per hour; drones are used for crop scouting; and precision seeding allows the company to save seed and avoid crowding. “We’re as professional as any conventional supplier now,” says managing director Andrew Burgess. “A lot of the things we’re becoming successful in are then copied by conventional farmers.”

With the organic produce industry growing by 5.3 per cent and outpacing the wider grocery market in the year to the end of June 2018, more people are coming to realise that, in certain products at least, the sector has become much more reliable and advanced than it was 20 years ago.

In recent years, organic sales have taken off in a handful of fresh produce items – namely bananas, carrots and tomatoes – and an expanding range of other products are now sold at the big-four retailers, including organic onions, broccoli, pointed peppers and even kiwis. For their part, organic carrots now account for seven per cent of volume sales in the product and have a higher level of participation than in any other category in fresh produce. However, demand is fairly flat at the moment and organic producers see potential to boost their market share.

The Soil Association’s Finn Cottle put recent sales growth in organic food as a whole down to changing consumer attitudes to provenance and healthy eating, adding that there are now more organic product lines. But in carrots, producers believe an emphasis on flavour is the key to future sales growth.

Spearheading a new marketing campaign called British Organic Carrots, RB Organic is hoping that by shifting the focus away from the traditional marketing message used by organic growers – the environmental benefits – and instead championing their superior flavour, more consumers will be persuaded to pay a bit more and go organic. Health and the environment will also be touted as key benefits for the consumer but with a lesser focus than before.

“It’s widely accepted that organic carrots taste better than conventional,” claims the producer’s head of farming Joe Rolfe. The reason for this, he says, is that in organic production the vegetable is placed under greater stress and grows more slowly, making it more flavoursome, more resilient to extreme weather, and more nutritious.

“In a conventional system you give the plant everything it wants,” adds Burgess. “You create a sterile environment, you kill every organism that comes near it, you pump it full of nutrients, and it grows like hell – but it’s got no flavour. Putting stress on the plant makes it grow slower and you get a more concentrated flavour in the root.”

Burgess, who is also director of agriculture at RB Organic’s parent company Produce World, is an impassioned but reasoned champion of organic production. He says he is convinced that fungicides have damaged the natural balance in British soils, allowing antagonistic organisms to become dominant. This makes organic carrots less susceptible to disease, he claims, noting that cavity spot is endemic in conventional carrot production but rarely seen in organic production.

One of the main problems with organic production is that yields can be significantly lower, with its detractors claiming the lack of agrochemicals makes weeds harder to control and crops more susceptible to pest damage.

Despite this, RB Organic produces carrots at scale, producing around 4,300 tonnes of organic carrots a year, as well as onions, leeks, potatoes and beetroot. The UK’s overall planted area for organic carrots is quite flat, Burgess says, but in north Norfolk plantings are set to expand considerably in the next few years. “You’re going to be looking at 12,000 acres of organic land within ten miles of the Houghton estate,” he reports.

The experienced grower stresses that his business is as professional as any conventional supplier now, proudly stating that he can’t remember the last time RB Organic missed an order. For most companies in the sector, organic vegetables have only ever represented a small part of a larger conventional business, but at RB Organic they are the sole focus.

“What we’re bringing to the party now is absolute dedication, focus and an authentic story,” says Rolfe. “We’re really keen to sell organics, whereas a lot of the companies we’re competing against don’t really want to do it – they’re doing it because someone’s told them to.”

This is starting to give retailers the consistency in quality and volume that was once lacking in organic supply. Importantly for consumers, it is also driving down prices. The supplier’s carrots are priced at £1 a bag at major retailers, and although this is more than double the price of a conventional bag at Tesco, Rolfe stresses that it is still very cheap given the cost of production. The main outlay for the company, when compared to a conventional grower, is hand weeding, with 80 to 120 seasonal workers employed across the grower’s Norfolk farm during the ten-week harvest period.

“People talk of price being a barrier in organics but the real problem is that conventional food is far too cheap,” he says. “Conventional growers have been pushed down a route of economies of scale, getting bigger and bigger, producing for less and less, and this has an impact on quality. We are really cautious that this is not about throwing stones at the conventional guys – everybody has their place in this world; we just want to be good at what we do.”

In this light, RB Organic is clear that it wants to see an “evolution” rather than a “revolution” in sales – a sustainable level of growth. “If all consumers went organic tomorrow we wouldn’t have enough and it would take us three years or more to even start to catch up,” Burgess says.  “We’re always going to be niche – we know that – but we want to maximise it.”

One of his biggest frustrations in trying to grow the category is that the branding of organic produce in supermarkets is so “generic, safe and legally sanitised” that it is hard for producers to get their story across on the packaging. “That’s actually one of the frustrations that drove us to do this campaign,” he says. “We just don’t think our story’s being sold.”

If the business had its own brand, Burgess says he would take more risks with the claims made on the carrots’ packaging – risks that wouldn’t make it past the legal teams at the major retailers. “I’d like to tell a story of how we grow the crop, how we work with nature, and talk about seasonality, varieties and flavour,” he laments, “but I know that’s a really subjective thing and difficult to prove.”

The more the organic producers can do this – to convince consumers that their growing methods and superior flavour justify the higher price tag – the more the sector will thrive.