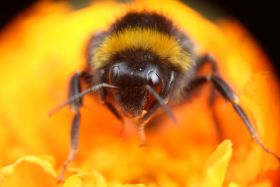 Researchers in Finland have created the first ever bee vaccine to help combat dwindling populations of pollinators, crucial to fruit and veg production.

The vaccine, developed by scientists at Helsinki University, makes bees resistant against microbial diseases that can be fatal for bee colonies.

Vaccinating insects was previously thought to be impossible because the creatures lack antibodies, one of the key mechanisms humans and other animals use to fight disease.

"If we can save even a small part of the bee population with this invention, I think we have done our good deed and saved the world a little bit," lead researcher Dalial Freitak said.

"Even a two-to-three percent increase in the bee population would be humongous," she told AFP.

Freitak’s breakthrough came from observing how moths could pass on immunity to their offspring after consuming certain bacteria.

"They could actually convey something by eating. I just didn't know what the mechanism was. I met with Heli Salmela, who was working on honey bees and a protein called vitellogenin. I heard her talk and I was like, 'OK, I could make a bet that it is your protein that takes my signal from one generation to another'."

The duo then collaborated to create a vaccine against American foulbrood, the most common and destructive disease afflicting bees at the moment.

The treatment is administered to the queen bee via a sugar lump, similar to the way children are given polio vaccines. The queen then passes the immunity to her offspring, spreading it through the bee community.

Freitak's team are currently raising funds to help make their vaccine commercially viable for farmers who rely on bee populations and other insects to pollinate their crops.

Research in 2017 estimated that up to $577 billion worth of food grown every year is dependent on bees and pollinators for production.

In April this year, the EU voted to ban neonicotinoid insecticides, which were linked to sharp reductions in bee populations.