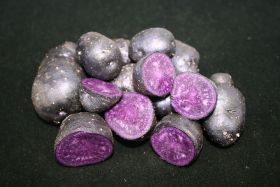 Scientists at The James Hutton Institute have unlocked the genetics of potato skin and flesh colour paving the way for new colourful varieties.

A new study identified a genetic molecule that regulates the production of anthocyanin, a natural pigment which influences skin and flesh colour.

Dr Csaba Hornyik, corresponding author of the study, said the work involved the use of a new layer of gene regulation to identify key genes influencing colour formation.

"Micro RNA molecules, or miRNAs, regulate many potato genes and can determine traits including disease resistance or tuberisation.

"For the first time, we identified a specific potato miRNA strongly associated with purple skin and flesh colour.

"Using molecular biology techniques, we characterized this miRNA and revealed the presence of another short RNA molecule in potato which was not described previously."

The research was supported by the Scottish Government’s Environment, Agriculture, and Food Strategic Programme, with the paper being published in Frontiers in Plant Science.