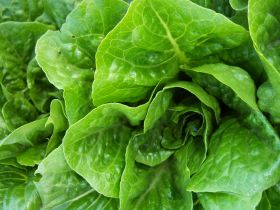 The caller estimated that for every percentage point salad tariffs increase, the UK will pay an additional £10-15 million

A fresh produce buyer for a major UK supermarket has laid out the full extent of how food supplies and prices would be affected if Britain leaves the EU without a deal.

The buyer named John, who did not identify himself further, called in to James O’Brien’s radio show on LBC (Leading Britain’s Conversation) after growing frustrated with hearing people dismiss fears of post-Brexit food price rises despite their lack of knowledge of the fresh produce industry.

He told the presenter how supermarkets would be affected, stressing that he had no interest in exaggerating the effect of leaving the EU without a deal.

LBC reported that he said: "Under WTO rules, we'd have to apply tariffs. These are extraordinary at times.

"You've then got the impact of weakening exchange rates. During the referendum, the exchange rate tanked, and we took massive hits internally. We passed some on to the consumer, but we absorbed some. But there's no way we'd be able to absorb any more.

"For every one per cent weakening – and it dropped 18 per cent last time – it's going to affect our cost of goods by 0.8 per cent. So if it drops by 10 per cent, you're looking at a 10 per cent cost increase.

"You've then got the problem of availability – and this is a shocker. Fruit and vegetables are the fourth priority for the government, so we've been told we will be given 25 per cent availability of our lorries to pass through Dover ports.

"So from what we have now, we have to quarter what we take in from the EU. That's before we get the gridlock of the remaining 25 per cent.

"We can get them from countries outside the EU, but these all have trade deals with the EU on an Anything But Arms basis. We won't have that."

He added that this time of year was probably the worst to be dealing with problems of availability and price since this when the UK is particularly reliant on imports.

"In April and May, it's when British stocks run out and the British harvest hasn't started,” he said. “We import almost everything for these two months. It couldn't be worse timing. All our stocks of onions, potatoes, carrots, they can run out, so we have to import everything."