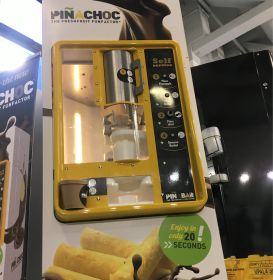 Dutch pineapple-slicing machine Piñabar will go on trial in a UK Tesco store for the first time this April.

The Piñabar has performed well in European retailers, especially in Germany, since its first sales in 2016. Created by Dutch Food Technology, it now has 500 machines across the world.

The Piñabar, which looks like a vending machine, receives wholehead pineapple before peeling and slicing it in a matter of seconds, and placing the slices into a plastic bucket for shoppers to take home.

DFT has already expanded the concept to include a Piñachoc machine, which adds melted chocolate to the sliced pineapple chunks.

Despite early success in other markets, the UK has yet to see the Piñabar take hold, something which DFT sales manager Michel van Keeken hopes the Tesco trial will change.

“We are starting a test in Tesco in April, it’s the first time in Tesco. We believe that when our machine lands, it will catch on. I hear from the growers that the UK is a good market for pineapple,” van Keeken says.

The pineapple category has enjoyed growth in the past year thanks largely to prepared formats. The sheer difficulty of preparing a wholehead pineapple by hand makes them off-putting for many customers however, but the Piñabar could change that according to van Keeken.

“The supermarkets are really happy because we bring an experience to the shop floor, it attracts people and generates traffic. We see a lot of complementary purchases and we also see an increase in sales, sometime two, three, four, even 10 times as before.”

Van Keeken adds that DFT are exploring other versions of the machine to include different fruits and additional ingredients, as well as expanding the brand worldwide.

“We are going to Scandinavia, we’re going into Asia, we have a lot of machines in China, and Japan and the US. I expect the US to explode when it arrives.”