With just over two weeks remaining until the UK’s intended departure from the EU, major food safety questions remain, with access to EFSA and RASFF uncertain 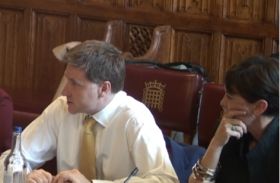 Those arguing that the UK is woefully unprepared for its departure from the EU on 29 March were given further ammunition last week as the House of Lords EU Energy and Environment Sub-Committee took evidence from Public Health Minister Steve Brine MP and Food Standards Agency Chair Heather Hancock.

Although major preparations have been made, the Committee heard, significant uncertainty remains concerning the UK’s relationship with the EU on food safety issues.

Brine said that the FSA would be highlighting to Defra (the UK Department for Environment, Food and Rural Affairs) the importance of continued scientific collaboration with the European Food Safety Authority (EFSA), which undertakes food safety risk assessments on behalf of the EU, but admitted the terms were still a matter for negotiation.

“We will not be able to contribute to the strategic direction of EFSA,” he said. “Access to EFSA’s risk assessments – that is a matter for negotiation. Their scientific opinions are made publicly available but the supporting data is not published. So following exit, if we don’t have access to the data, we may have to source our own.”

“We will continue to trade in some form with the EU,” added Hancock. “They will continue to be a big trading partner in that way, ensuring that is underpinned by good science and evidence. So we’re very keen from a technical perspective that we continue to be as integrated with EFSA as much as possible, and sharing technical science information to manage our shared risk pathways.”

Concerning the UKs access to the Rapid Alert System for Food and Feed, Brine stated that third country access was limited. “The exact nature of our access to and participation in RASFF is subject to negotiation,” he confirmed. “Our preferred position is to negotiate full access to the RASFF system, as I think it’s mutually beneficial.”

Regarding suggestions that the UK may lower standards in order to secure a Free Trade Agreement with the US, however, Brine was emphatic: “We are absolutely crystal clear - we are not going to lower our standards in pursuit of trade deals. We see Brexit as an opportunity to increase and improve food safety standards and not to diminish them.”

Hancock also warned that the FSA would have to be resilient in the face of increased lobbying. “The FSA doesn’t really get lobbied these days,” she said. “That’s going to change quite significantly. We’ve already seem some early indications of that kind of activity. We need to be very clear about how we deal with that.”

Anxiety over the UK’s lack of preparedness is all the more heightened given the UK government’s refusal to rule out a “cliff-edge” no-deal Brexit, despite Parliament voting to definitively take it off the table. Brine suggested that the position of some Conservative backbenchers was not held by those making the decisions.

“Those of us that are in government, do the heavy lifting and see the benefits of the relationship with the EU are, I would say, better placed than some of my colleagues on the back benches who prefer to rely on the principle that it’ll be all right on the night,” he said. “Those of us in government want to make sure that it’s all right on the night and that’s why we should reach across to our friends in the EU. The idea of some sort of clean break that we walk away and have nothing else to do with each other, like a couple with no children, is utter nonsense.”