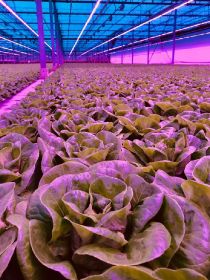 Salad supplier G’s is exploring the possibilities offered by LED-lit indoor farming as it looks at future options for supplying baby leaf in the winter months.

At present, the company grows most of its winter baby leaf in Spain and Italy, while in the summer it produces a large volume of salad outdoors in the UK.

It has been revealed that for the past couple of years G’s has been running two trials with Harper Adams University to explore the possibilities offered by indoor production.

The company dismissed any suggestion that the decision to carry out the research was Brexit-related since it began before the referendum.

Winter Grow is a pre-commercial trial exploring the possibility of indoor winter production of baby leaf in the UK, while a project called Smart Prop is looking at increasing growth and producing stronger plants at G's propagation facility in East Anglia. This is where the producer propagates seedlings for planting out in the field.

Harper Adams project lead Ben Barnes said the trials were “looking at two big questions: Can we increase the efficiency of the propagation facility in terms of getting a more homogenous crop? Is it feasible to produce baby leaf crops during the winter at an affordable price point?”

"One element of this is the development of ‘lighting recipes’ to enhance plant growth characteristics,” he added.

“We’ve got multi-spectrum LED lights, so we can turn up the different amounts of red, blue, green and white, and even far-red light.

“These are fairly expensive, so once we have worked out what works best, we can buy fixed spectrum lights which are a tenth of the cost.”

The company has a collaboration with indoor farm Growing Underground in Clapham, which uses hydroponic systems and LED lighting to grow micro greens and salads.

For its trial, G's is using a refurbished shipping container, which it calls a “growtainer”, at its Second Willow plant nursery.

“I’ve actually just finished harvesting our first trial, a growing medium trial,” Barnes said. “We’re testing all the different growing media and I’m going to process those results to see what comes out on top. There are so many variables.

“We’re trying to optimise those variables. You think LEDs are very efficient, but they still generate a heck of a lot of heat when you’ve got them essentially turned up to full.

“It is more about keeping the space cool, and the plants obviously are transpirating so we’ve got dehumidifiers in there sucking the moisture out of the air. Another option would be to take out heat and put it into the greenhouse, which would be cost-saving.

“Actually, one of the biggest problems with the vertical farming concept is this interaction between moisture and temperature. You’ve got the two factors constantly fighting against each other and that ends up sucking huge amounts of energy if you’re not careful.”