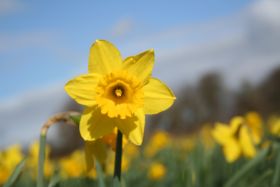 Scottish cooperative Grampian Growers, which specialises in daffodils and seed potatoes, told The Courierthat it had enjoyed the fourth-highest daffodil volume in its 51-year history. More than 71 million stems were picked by its members, with the flowers sold into high-volume markets in just 51 days.

“The last flowers left for supermarkets across the UK on Wednesday morning and we’ve had a great season, although it would have been fantastic to have another week to capitalise on the Easter market,” he told the Scottish newspaper.

“Prices have risen every week, which is unusual and only happens when Easter is late, but we’ve had a great run this year.

He added that flowers were picked every day of the season, which is “very unusual”, and that the reprieve from a no-deal Brexit came as a relief.

“A delay till October means we should get right through the bulb export season without having to make alterations to export certification,” Clark told The Courier.

“The same documentation as usual will continue and we can export from Montrose throughout mainland Europe.

“We had contingencies in place because if we had come out with no deal we would have needed two inspectors – one for the United States and another for the EU, where we usually need just one.”