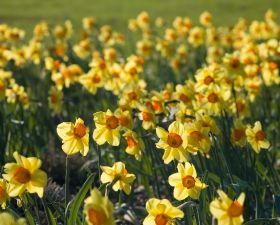 Daffodils from Wales’ Black Mountains are playing an important role in the fight against Alzheimer’s, it has been revealed.

Powys-based bioresearch company Agroceutical Products is growing the flowers to be processed and supplied to pharmaceutical companies.

The daffodils, which are crystallised into prescription tablets and capsules, contain galantamine – a compound known to slow the progression of Alzheimer’s symptoms.

Established in 2012, Agroceutical Products is owned by former sheep farmer Kevin Stephens, who grows the flowers 1,000 feet above sea level in the Black Mountains.

Thanks to the altitude the flowers produce more galantamine than daffodils grown elsewhere.

The company’s team of five produces 20kg of galantamine a year, helping over 9,000 Alzheimer’s patients worldwide.

Agroceutical Products currently exports to pharmaceutical companies in the US and Canada, and now has plans to enter the New Zealand market with support from DIT.

Kevin Stephens, co-founder of Agroceutical Products, said: “It’s amazing to think that the Welsh national emblem, the humble daffodil, has the potential to improve the lives of Alzheimer’s patients across the world, while providing an economic future for hill farmers and their families across Wales.

“There has been greater interest in plant-based pharmaceuticals in recent years and there are many untapped plant compounds that could become very important drugs in years to come.”

Minister of state for trade and exports Baroness Rona Fairhead added: “I’m delighted to see that the team at Agroceutical Products are bringing the medical benefits of Welsh daffodils to Alzheimer’s patients worldwide”

With Brexirt approaching, she added: “The Department for International Trade (DIT) stands ready to help businesses expand their reach internationally.

“I would encourage all businesses to make the most of the offer set out in our Export Strategy, and to get in touch with our teams across the UK.”

The company’s success was hailed by DIT at the start of the RHS Flower Show in Cardiff this week, which ran from 12-14 April.