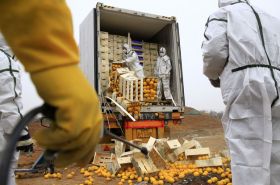 Food fraud numbers spiked in 2018 following a record number of requests for cooperation issued by the EU Food Fraud Network.

Fruit and vegetables ranked lowest in the fraud chart, with just six cases from the total recorded. Fish came out as the worst offender with 45 requests made by the network. Just over 13 per cent of the offenses related to unapproved treatment of processes.

The report states: “The complex nature of our globalized food supply chains and the economic motivation to provide cheaper food products have contributed to the prevalence of food fraud. The cost for the global food industry has been estimated at around EUR 30 billion every year, thereby hindering the proper functioning of the internal market.”

Historical food fraud disasters include the rapeseed oil fraud in 1981 which affected about 20,000 people, and led to between 370 – 835 fatalities in Spain, after toxic oil intended for industrial use was sold as olive oil.

In 2013 UK retailers were embroiled in the notorious horse meat scandal, after horse meat was found in beef products across the United Kingdom, Ireland and other European countries.

“As a result, competent authorities are losing credibility, companies are losing money and consumers are losing trust in food. It creates a major paradox: EU food is safer than ever, yet consumer’s trust is low,” the report stated.

The network said it was also taking Europe-wide action against imports from non-EU members containing illegal residues on produce, and had contacted “the non-EU countries concerned asking to carry out investigations at the premises of suspicious establishments”.

“These actions related mainly to unauthorized pesticides and additives in food of non- animal origin and unauthorized substances in fishery products,” the report added.