Agroecological systems can make huge contribution to Paris Agreement target of keeping global warming below 2°C, according to new study 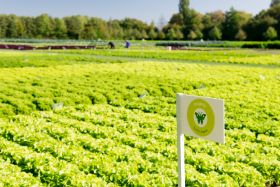 Organic farming and other forms of agroecological agriculture can make a major contribution to the Paris Agreement target of keeping global warming below 2°C, a new report has found.

The study by French think-tank IDDRI, entitled Agroecology and carbon neutrality: what are the issues?, looks at how climate mitigation strategies often rely on intensifying food production, proposing to increase yields to free up land for afforestation and bioenergy.

But the report warns that this requires high use of pesticides and synthetic fertilisers, which risks damaging soil health and biodiversity, while potentially undermining the capacity of European farming to adapt to climate change.

It also argues that tackling issues of food waste and shifting to more sustainable and healthy diets remain central to tackle climate change.

The report sets out how agroecological farming can make a major contribution towards keeping global warming below 2°C, with a 47 per cent reduction in European agricultural greenhouse gas emissions, alongside benefits for biodiversity, conservation and human health.

The Paris Agreement, which came into force in November 2016, set out a target to limit global warming to well below 2°C and pursuing efforts to limit it to 1.5°C.

The new report follows IDDRI’s Ten Years for Agroecology in Europe study, published in the UK earlier this year, which concluded sustainable farming is capable of feeding a growing European population.

Rob Percival, head of policy for food and health at the Soil Association, said: “Agroecological farming, including organic, offers our best hope of responding to climate change. We urgently need to reduce agricultural greenhouse gas emissions, but we must also protect soil health, nurture biodiversity, and build resilience into agricultural systems.

“Pesticide-hungry ‘intensification’ offers a false solution. The UK government must prioritise agroecology within the Agriculture Bill and ensure farmers are adequately supported to transition to more climate resilient systems. As the climate protests this week are highlighting, we’re running out of time.”

Other key points from the report are that:

- A transition to agroecological farming could remove 380,000 tonnes of pesticides per year from European farming.

- Most climate mitigation scenarios rely on the intensification of food production, increasing crop yields to free up land for afforestation and bioenergy – but these, the study warns, are based on untested assumptions about the scope to intensify food production and are accompanied by significant downsides such as high use of pesticides and synthetic fertilisers that potentially harm soils and insects, including pollinators.

- Agricultural intensification and a reliance on pesticides and synthetic fertilisers risks damaging soil health and biodiversity, while potentially undermining the capacity of European farming to adapt to climate change.

- A transition to agroecology would need to be complemented by dietary changes that are already anticipated on health and environmental grounds, including a shift towards more plant-based proteins and roughly 50 per cent less meat.

This is the second study from IDDRI to be published this year. The Soil Association collaborated with IDDRI in February to launch an English translation of Ten Years for Agroecology in Europe, which sets out to show that agroecology can feed a growing European population a healthy and sustainable diet.

Agroecological agriculture, of which organic is one system, is based around small farms with low inputs and a long-term balance between food production and the protection of natural resources.