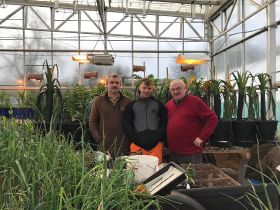 Medywn Williams (far right) with his son and grandson

One of the UK’s most renowned vegetable growers Medwyn Williams is returning to the Chelsea Flower Show this year with previously unseen varieties.

Included in his trademark display of vegetables will be a yet-to-be-named giant parsnip, which is “the whitest variety ever grown” and measures over five feet, and an F1 hybrid tomato named ‘Y Ddraig Goch’ (or The Red Dragon).

The latter is the first vegetable to ever be registered with the Animal and Plant Health Agency in the Welsh language.

Another new tomato variety with a Welsh connection called Maisey will be displayed as a tribute Charles Maisey of Pontyclun in South Wales who is considered one of the best Welsh tomato growers of recent decades.

“As a tribute to his growing skills I decided to register this new variety as ‘Maisey’,” said Williams. “Not only is it a lovely shape, the flavour, as with the Y Ddraig Goch, is also exquisite.”

After a nine-year absence from the show, which will run from 21-25 May, the 11-time Gold winner will be creating his display of vegetables with a focus on flavour as well as appearance.

Williams said: “I am looking forward to returning to Chelsea, with a range of new vegetable varieties to show off to the public. My son, grandson, and I have been working hard for months to ensure that our comeback display is the best yet.”

Also on display will be watermelon radishes, which resemble the fruit when cut open but have the slightly peppery flavour of a radish.

While Medwyn is famed for growing giant vegetables, this year he is also displaying a miniature okra. The Baby Bubba is only half the size of regular okra plants but produces a large crop of fruits.

Williams, who will be on stand GPE223 at the show, will be joined by representatives from Canna to provide information about their growing mediums and nutrients.