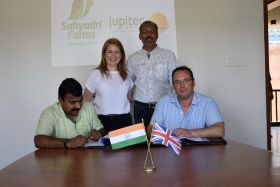 Jupiter Group has chosen Sahyadri Farms as its exclusive growing partner in India for the production of Arra grapes.

The move follows the company’s announcement in February that it had been awarded exclusive Arra production and marketing rights by Grapa Varieties in India.

The Shropshire-based supplier said the 8,000+ ‘marginal farmers’ that form Sahyadri Farms, who each grow fruit and vegetables on less than one hectare of land, would benefit from Jupiter’s global infrastructure.

After successfully trialling Arra varieties in India, Jupiter is now scaling up production, with 100 acres set to be established by the end of 2019 and an additional 5,000 acres planned by the end of 2023. The first major harvest will be in 2020, for export to global markets.

Jupiter chief executive and group managing director Mark Tweddle said: “We are delighted to solidify our relationship with Sahyadri further to provide a supply of Arra varieties from India. I wholeheartedly reiterate my belief that Arra varieties will change the landscape of demand for grape from the continent.”

As the first table grape breeding program to enter India, Grapa, which commercialises the Arra varieties on behalf of Agriculture Research & Development LLC, shares Jupiter’s enthusiasm for the move.

“We were amazed by the operation of Sahyadri Farms and their new state of the art packing house. I don’t think Jupiter could have found a better partner in India for the Arra varieties.”

Recently ranked in The Sunday Times HSBC International Track 200 for the second year running, Jupiter continues to expand its position in the market. Achieving an average annual sales growth of over 100 per cent for the last two years, the company was placed 22nd in the list of the UK’s top performing private mid-market companies.