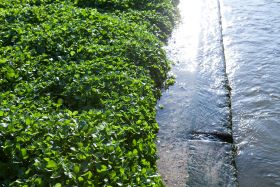 Watercress received royal patronage this week after making an appearance on the menu of the state banquet attended by Donald Trump and the Queen.

Trump’s high profile visit has once again sparked protests in London ahead of the 75th anniversary D-Day commemorations, which the controversial president will share with the royal family.

On Monday evening Trump, the Queen, and 170 guests were treated to a very British menu at Buckingham Palace, featuring a selection of locally sourced ingredients, including a starter of steamed halibut accompanied by a watercress mousse, asparagus spears and chervil sauce.

It is not yet know if Trump, famous for his fast food predilection, took a shine to the heritage crop.

Known for its distinct peppery taste and a range of health benefits, watercress grows in natural spring waterbeds in Hampshire and Dorset, from April to October.

The leafy green is naturally high in Vitamins A,K and protein, as wel as being a source of Vitamin B6, folate, calcium, potassium and fibre.

Nicola Dodd, marketing manager at AHDB, said: “Watercress is such a versatile ingredient with a lovely peppery flavour that pairs brilliantly with so many foods. There are lots of ways it can be incorporated into dishes to not only add flavour but also key nutrients. It is no wonder the Queen approved it for the royal menu this week for such a high-profile banquet.

“Watercress has been on British menus for years on the quiet but is coming into its own currently. The Queen is very much ‘on trend’!”