"Ignore claims that fruit is too sugary" 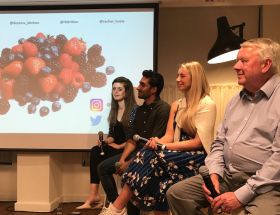 Shoppers should ignore claims to watch their sugar intake by avoiding fresh fruit, said a panel of experts.

Fruits such a berries, now a staple product on the shopping list, contain a sugar that is released slowly, and processed by the liver, meaning they do not convert in unhealthy fats at normal levels of consumption.

“It’s worrying that only 27 per cent of people on average get close to their five a day, if that. The fact that we’re then discouraging people from eating fruit is quite simply horrifying for a health professional,” Lambert said.

“What we do know is that fresh berries are the most delicious fruits you can eat, they are great for you, enjoyable and available all year round, we wanted to get everyone here, and do a bit of myth-busting.”

The panel warned of a rising number of individuals who were turning to increasingly outlandish and unsupported diets to help treat conditions or improve their health.

“A by-product of unqualified advice is people’s health being at risk. I’ve definitely seen a rise in my private practice of people coming in with bizarre concoctions of lists of things they saw online, spending a lot of money, and ultimately it puts the trust of the public at risk with health professionals, knowing who to trust and who to go to for information, we feel overwhelmed,” Lambert said.

Top of the unsupported myths was the claim that fruit is a problematic foodstuff due to its sugar content.

“The difference with fruit is that it’s metabolised in the liver, whereas white table sugar contains 50 per cent fructose and glucose.  When people worry about sugar it should be about the white table sugar that you find hidden in foods such as baked beans or pasta sauces, where you wouldn’t expect,” Lambert said.

Aujla added: “There’s a lot of misinformation about sugar, confusing it with fruit. Even with fructose you have to get to quite high consumption before you get to the production of fats that are bad for you.

“If you’re looking at whole fruits and veg it’s unlikely you are going to be getting anywhere near those levels.”

Other challenged myths were the claim that organic was much healthier than non-organic fruit and veg. “There have only been three studies that have actually taken all the data in one place and tried to find meaningful patterns [in nutrition levels]. On some occasions organic food was higher, on some occasions non-organic food was higher,” Day said.

Aujla also refuted the claim that frozen fruit was not as nutritious as fresh fruit: “Frozen fruit is just as good; they are frozen at source and retain their nutritional value, some of the tinned stuff is actually higher in Vitamin C.”

Consensus on the panel was reached around the need for variety, across fruit and veg, and within the berry category.

“These sorts of berries have hundreds of different types of phytochemicals, it’s about variety rather than one particular type,” Aujla said.