Britain celebrates record strawberry shipments in 2018, seeing a 56 per cent leap in export value, according to HMRC 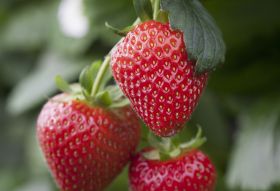 British strawberry exports are booming, with exports leaping 56.3 per cent in 2018, according to HMRC figures.

A record £3.9 million of fresh UK strawberries were shipped in 2018, and major European export hub The Netherlands emerged as the largest market, growing by 361 per cent between 2017 and 2018.

According to HMRC estimates, as many as 1,208 tonnes of strawberries were exported from the UK last year to markets including Iceland, Ireland and even Spain which, despite its warm climate, imported almost £380,000 worth of strawberries grown in Britain.

Meanwhile, on home soil a whopping 166,055 portions of strawberries and cream are expected to be served at Wimbledon this year.

International trade secretary Liam Fox said: “As Wimbledon starts, and with the ‘Great British Summer of Sport’ in full swing, I am delighted that Britain’s exporters are serving up a treat, with more people than ever before enjoying classic British strawberries and cream.

“Food and drink is one of the UK’s most successful exports, accounting for £22.6 billion last year. And with demand rising, the Department for International Trade is ready to help UK businesses to succeed abroad.”

The Department for International Trade (DIT) and the Great Britain campaign have partnered with major sporting events taking place across the UK this summer to celebrate the ‘Great Britsih Summer of Sport’ – an initiative designed to boost tourism and business opportunities.