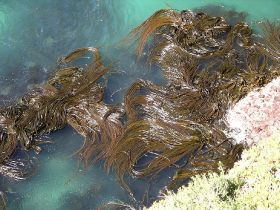 The future of food and fresh produce packaging may come from the oceans as trials from Britain’s biggest food companies look to the waves for solutions to the global plastic pollution epidemic.

Just Eat’s director of business partnerships, Robin Clark, told a parliamentary hearing that the takeaway company is developing a seaweed-based packaging for sauces and dips, working with a company called Notpla, a start-up founded at Imperial College London in 2013.

Meanwhile Waitrose is developing a new plastic replacement material from used Langoustine tails, (where scampi meat comes from) having teamed up with a Scottish tech firm called Cuan Tec, according to packaging manager Karen Graley.

Clark said Just Eat was also hoping to use Notpla’s algae solution on cardboard to create a more durable packaging that is still biodegradable.

Clark told the Environment, Food and Rural Affairs select committee: “We steered away from composting. We ran a global search to find a new material and were invited to work with Notpla who have been manufacturing seaweed sachets for water.

“We were able to convert them to ketchup sachets and dipping sauces. We have run two trials and they have been fantastic, the customer feedback has been really positive, 92 per cent want to see them more.

“We’ve been able to take the alginate and spray it onto cardboard and that washes out through the recycling process so if it escapes the waste stream it degrades much quicker than the 600 years that the plastic takes. We’re hoping to see trials on that in the next few weeks.”

Clark also revealed the company was working on creating a “bio-transformative” material, which breaks down plastic into its constituents.

“One of the other partnerships we are looking at is with an additive manufacturer that has designed a bio-transformation process to convert plastic into water, CO2 and biomass.

“This is not oxy-recycling, this is not biodegradation, this is a bio-transformation. It’s in the early stages at the Imperial [College] setup so we are really excited about trailing that with manufacturing of plastic boxes.”

Graley said Waitrose’s partnership with Cuan Tec was part of its plastic reduction plan to phase out the currently 17,500 tonnes of plastic the retailer uses through its supply chain each year.

She also revealed that Waitrose’s loose fruit and veg experiment in an Oxford store, utilising refill counters for fresh produce, has been a great success, adding that costs for consumers on the loose products were down by 15 per cent.

“We are not experiencing that purchasing loose products is more costly than pre-packed.

“Customers love it, the replenishment has been far greater than we initially anticipated. We’re looking to trial that for 11 weeks to have some really good qualitative and quantitative research and insight and feedback and then we’ll look at the next steps for that. We don’t want any detrimental or unassociated waste on the products,” Graley told Parliament.

“The feedback and take-up has been overwhelming. We just need to implement it in the right way. One store is far easier than rolling it out across 300.”