Mini-heatwave sparks abundance of strawberries across the UK, with Tesco taking on extra crops to sell 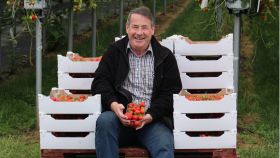 Tesco has bought an extra 150 tonnes of strawberries from its growers after a mini-heatwave led to a sudden flush of crops.

The retailer is discounting the UK’s favourite berry with one kilo boxes going for £4 as a result. Tesco said taking on more crops during abundance was part of its commitment to tackle food waste. Normally a standard 400g punnet of strawberries at Tesco costs £2.

Tesco berry buyer Jon Lock said: “The recent mini heatwave not only produced a bumper crop of strawberries for growers in some regions but also helped raise sugar levels to make them extra sweet and juicy.

“As soon as we heard that some of our growers had got more than expected on their hands we moved in to help.”

According to Tesco the extra sunshine was strongest in Kent, West and East Sussex, Herefordshire and Scotland, which experienced bumper crops.

With strawberries planted to in staggered intervals throughout the year, overlapping harvests can lead to too much fruit on the market.

Grower Alastair Brooks who owns a fruit farm near Faversham in Kent said: “The slightest change in the weather can really have a big effect on production and that happened recently with the mini heatwave after several weeks of cooler, wetter weather.

“As a result the strawberries ripened much quicker leaving us with a crop flush. We stagger our production to even out production throughout the season but sometimes the weather can be very unpredictable.”