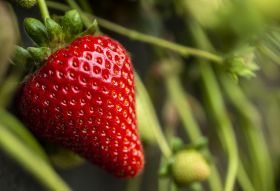 Moxie is showing up to 29 per cent higher yields

Moxie, Royal Royce and Valiant were bred to perform well in warmer longer days of summer, while Victor and Warrior were bred for cooler climates along California’s coastline.

Both Moxie and Royal Royce sprout fewer runners, with UC Davis estimating they could save up to $5000 in labour costs with savings made on pruning labour.

“Runners are a huge expense,” said Greg France, a longtime California Strawberry Commissioner and family farmer from Santa Maria. “We have to hire labour throughout the season just to cut back the runners. These new varieties will be a big deal for us.”

All five of the new varieties are less susceptible to a range of diseases, including Fusarium wilt, Verticillium wilt and Macrophomina.

UC Davis said all the new berries are “large, flavourful, firm and disease resistant”, with Victor and Valiant performing well in organic systems. They added that Moxie and Royal Royce showed yield increases of up to 29 per cent over previous UC varieties.

“These new varieties are intrinsically different from the ones they replace,” said Steve Knapp, professor and director of the UC Davis Strawberry Breeding Program. “After more than three years of field tests, we’re seeing higher yields, greater disease resistance and better quality after harvest.”

“The price and quality of strawberries improve when farmers have access to varieties that help them grow better berries more cost efficiently,” added Dave Murray, a farmer and partner in Andrew & Williamson Fresh Produce.