Veg box specialist expects turnover to top £70m next year, having switched to employee ownership in 2018 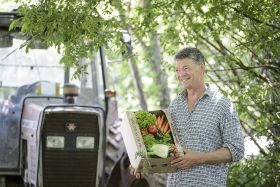 The Devon-based company reported the best sales year in its 30-year history, with a 10 per cent uplift for the first half of the current financial year also meaning it will exceed its target of £70 million turnover by 2020. Profit before tax and co-owner profit share is expected to be a record £3.7m.

The trend for plant-based diets has boosted Riverford sales, the company said, with its 100 per cent organic seasonal veg boxes at the heart of its range, but it also believes it has benefited from a growing consumer mistrust of large corporations in traditional ownership.

Riverford transferred to employee ownership in June 2018 to protect its ethical values for the long-term and to protect it from sale, and believes the move has already made a positive difference to its financial performance.

Managing director Rob Haward said: “We’ve had the best year in terms of sales growth in company history and that is no coincidence. A growing sense of unity, shared purpose and a new sense of pride among co-owners has really transformed the business in the last year, with motivation, ideas and a sense of ownership impacting everything from productivity, to financial performance, to staff turnover.”

Staff turnover has reduced by 15 per cent in the last year thanks to new channels in the business, such as a staff council, that consult on issues such as co-owner wellbeing, culture and pay.

Riverford founder Guy Singh-Watson, who will be taking part in the FPJ Life Stories segment at FPJ Live on 8 October, explained: "Founder-entrepreneurs who sell their businesses to the highest bidder are typically smug to start with but, as the new owners destroy their creation, they suffer an identity crisis, ending up rich but bitter.

“By contrast, over our first year of employee ownership I have grown happier every day, watching Riverford grow by doing things better, with integrity, while generating profit, and – on a good day – with joy. I have no regrets; only pride in what we are achieving together."

Riverford said increased profits will be re-invested in the company, in areas such as mechanisation in the packhouse and on the farm, to help secure its viability for the future, as well as in staff pay, benefits and working conditions.

The company also aims to double the profit share to co-owners from 10 to 20 per cent.